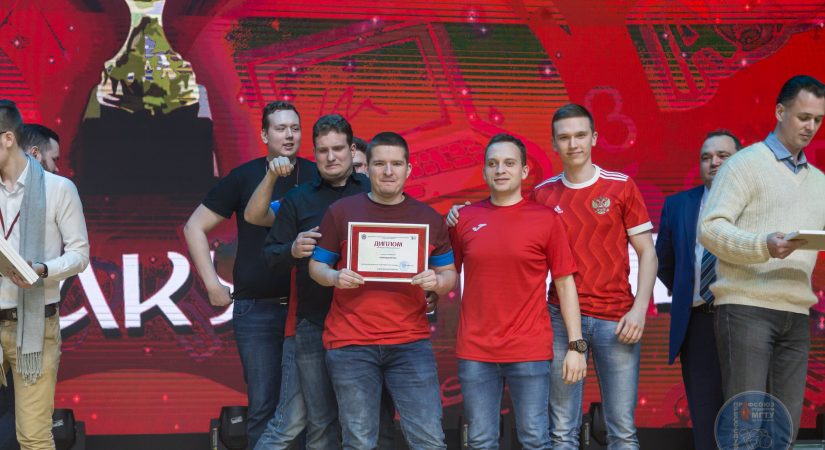 On 10th April, 2018 were summarized the results of one of the most important student competitions between the faculties of the BMSTU — the “Faculty Cup”. We asked the team of GUMIC faculty about how this competition took place this year. The team is: students Ivan Lanshin, Anton Novikov, Danil Zarubin and the team captain – Ilya Kuzmin. Below are their impressions of the event.

The Cup of the Faculties (CF) is a traditional competition of the university where all the faculties of the Bauman University compete among themselves, including the GUMIC faculty. From year to year the competition is more exciting, diverse and, the most important thing, unforgettable.

The competition consists of several stages:

1) The introductory stage. The teams for participation in the CF are being shaped and registration of participants starts. Each participant gives their competition books to the organizers of the competition and at the same time receives points in the rating table.

Points are credited for the account of the received marks in the last two semesters. GUMIC team was a mixture from students on academic leave, excellent students as well as not very good ones. For each team was selected a curator who helped them in the organization. This year our curator was Maria Zorina, an activist and student of the department of Rocket and Space Technology. She has also took part in the program of improvisers.

2) Sports stage. In this stage our team faced less pleasant obstacles, which demanded responsibility, courage, steadfastness and the desire to win. By a majority of contestants this stage is compared with that of global scale. There were a lot of fun and memorable moments, and everyone got a lot of fun from participating in that stage. We chose students in such a way that they had a desire to help our team and there were no problems with their studies. GUIMC is one of the few faculties, but despite this, we managed to show everyone that we are able to keep the bar among the other faculties. Competitions were in different kinds of sport: laser tag, volleyball, football and “fun starts.” In the laser tag, one of the exciting and emotional types, our team fought hard and managed to reach the quarter finals.

Each team showed itself in its own way; everyone had their own advantages and goals. We showed that our faculty was one of the most determined and, despite a bad ear, covered and understood each other from a half-look. We fought until the last “soldier”.

Volleyball is one of the favorite sports in Russia. Most of the faculties had guys representing the team of the Bauman University, and we, the GUMC team, as amateurs of volleyball, managed to adequately restrain the onslaught of strong faculties and survive to 1/8 finals, losing one of the favorites of the competition to the Faculty of  Robotics.

Football is one of the most popular games in the World. Nevertheless the bad weather conditions, our team played on an equal footing with one of the strongest faculties, but everything was decided in a penalty shootout.

After sporting events, every team was given a break in a few days

3)Intellectual stage. One of the most difficult stages of the CF. Each team had to disclose their knowledge, show their intellectual skills and show ingenuity.

The questions were complex, requiring broad knowledge in the field of world sports, and following the results of a mental contest we managed to occupy an honorable second place (from the end).

4.) The final stage. The Grand Final is the most spectacular part of the contest, which includes two stages: a video on the topic “The Team of My Dreams” and the creative action — “Football with the Eyes of a Student.”

What was the meaning of our video? That to achieve the goal our team is ready to fight to the end, helping each other. The process of shooting was laborious, the script was reworked several times, and the shooting zones were selected for a long time. And all this was worked out in the shortest possible time given by the organizers. Our team spirit has always been on top, and nobody was able to catch up our aspiration to victory. Finally our gorgeous eight won in the nomination “The Team of My Dreams” for the best video.

Now let’s move on to the creative number. We wanted to convey to the viewer a simple idea – “no matter where you watch football, it is the most important with whom”. It turned out quite fun and original, with the involvement of guys from other faculties, for the number to be more artistic. But at the same time our team gained a lot of new experience: the ability to improvise, play for the public and work in a team.

In conclusion, I would like to say that we received not only many positive emotions, but also got new acquaintances and gained knowledge. We also invite you to participate in future events hold by our faculty and university. After all, active student life will always be remembered for many years, use this moment, since youth is a quick-passing flaw.

We also express our gratitude to the cultural commission, to the dean’s office of GUIMC and personally to Alexander G. Stanevsky, our curator Maria Zorina and everyone who helped us during this event